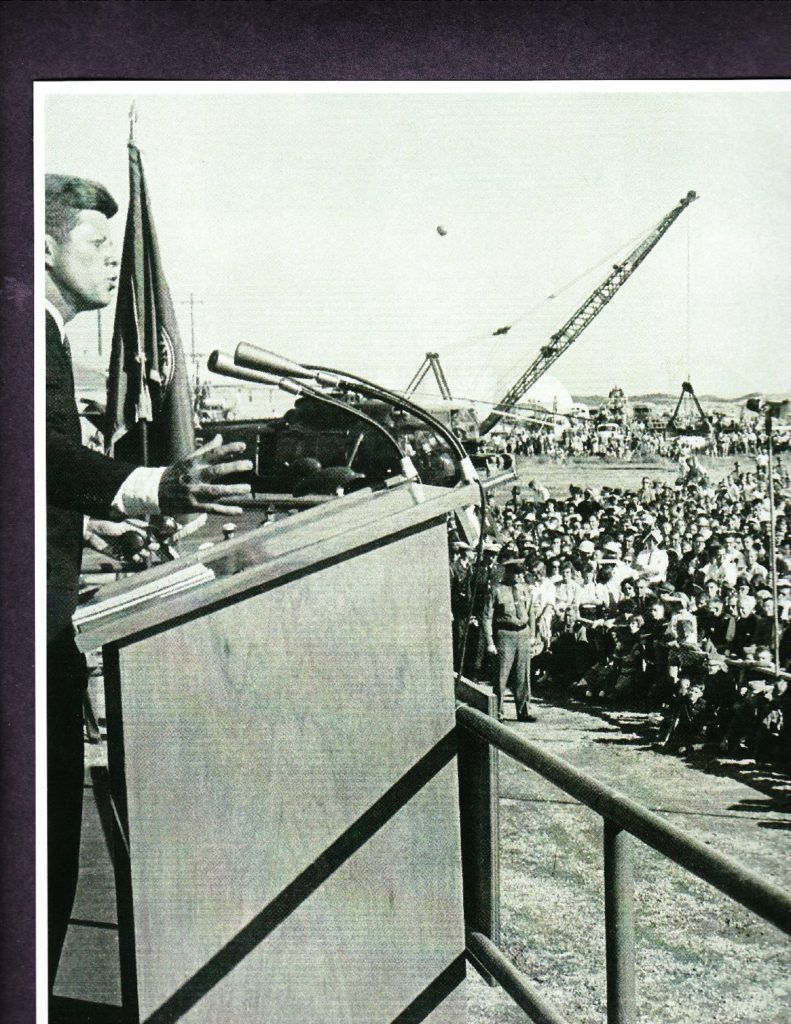 On Sept. 26, 1963, President John F. Kennedy visited my home town, Tri-Cities, Washington, to dedicate a nuclear facility. My mother decided to take my brother Ken and I to see the President – and so did just about everybody else in the three cities of Kennewick, Pasco and Richland.  I was 13 years old. When we arrived we were at the back of a huge crowd of 37,000 people in an open field. We could barely see the podium. I asked mom if I could try to worm my way up to the front. My mom said absolutely not, that she’d never find me after the event in this big crowd. I told my sweet mother that this was the one time in my life I would disobey her. I apologized, and told her I loved her very much, but I just had to go – it was a once-in-a-lifetime moment. I asked if I could take my brother Ken with me, but she grabbed a hold of him with both hands. I slithered my way up to the very front – my goal was to be the closest audience member to the President. I finally made it! I was mesmerized by his speech, closing watching the media, too, who were very close, and it seemed almost dream-like – definitely a moment in time. During that speech, then and there on that very day, I decided to become a journalist some day, so I could report on big events like this one. And that’s exactly what I did. After his speech, the President came down to shake some hands. There were some veterans or Boy Scouts with hats next to me and I think the President came down just to shake their hands. But lucky me, they were right beside me. I reached out and the President grabbed my hand! I shook his hand and then I remember as he pulled away my hand got caught in his white sleeve for a couple of seconds. I remember feeling and seeing the red hair on his arm. Then, he headed for the helicopter. He had shaken only about five hands, and I was one of them! Sadly, less than two months after this moment, President Kennedy was assassinated in Dallas, Texas, on November 22, 1963. I have told this story many times over the years, and naturally people were skeptical. On July 31, 2014, I was reading a history book and I saw this photo of the President on that day, making that very speech. It suddenly struck me that I might be in the photo – I looked closer and there I was! Right next to the guys with the hats, closer to the President than anybody else in the crowd, just like I remembered. Here is that photo

I was there Mike.