Longtime Tri-Cities resident Bill Jordan, writing under the name “William Nolan,” has published a novel. No big deal, you might say, but Jordan is 87 years old and was inspired by his better-known author son, Mike Jordan.

Bill Jordan, a former instructor at Columbia Basin College, released “Ensenada Blanca,” published by Amazon, this month. Mike Jordan, who grew up in the Tri-Cities, graduated from Kennewick High, and now lives in Malibu, Calif., had been a novelist for years.

Mike Jordan currently has three novels released worldwide. The latest, “Your Heart of Gold,” is partially set in the Tri-Cities.  His website is mikejordanbooks.com and his Facebook page is Facebook.com/mikejordanbooks.

“My son Mike is such an inspiration,” said Bill Jordan. “I had these stories inside me, mainly from the years of visiting Baja California, and he said ‘Dad, it doesn’t matter how old you are. Go for it!’  So I did.”

“Ensenada Blanca” follows the journey of recently divorced John Brown south to the tranquil beaches of Baja California seeking a measure of redemption, and hoping to find himself again. There, he meets Elena, finds love and when they accidentally witness a drug cartel murder, end up running for their lives.

The elder Jordan said his son edited his first draft “and it almost killed me.”  The younger Jordan has been a journalism professor at Pepperdine University in California for years and is widely known for his evil green editing pen.

“The thing came back with green markings from top to bottom, lines and arrows and it was wild. But I followed his instructions, just kept at it, and man did it make a difference.  So far everybody who has read it has been really impressed.”

The elder Jordan also credits Tri-Cities author Renee Riva, who he met at a local Farmer’s Market, as an inspiration. Riva, a prolific author of children’s books and novels, kept in touch with Jordan and reassured him when he had doubts about his writing.

Jordan was the Vocational Education Chair at CBC before he retired in 1987. After retirement he spent many summers in Baja California, keeping a journal about everyday life and the people and places he visited. Those journals, and vivid memories from those days, inspired the novel.

Mike Jordan is a 1968 graduate of Kennewick High and a former Tri-City Herald reporter.

“Crockett’s Coin” is the first novel in Jordan’s epic series of romance, war and social justice in the 1800s. “The Freedom Song” is the second book in the five-novel series.  “Your Heart of Gold,” the first installment in Jordan’s “Lovequest” series, which includes several Kennewick scenes, is also a recent released.

“Crockett’s Coin” is the debut novel in the “Lost Heroes Series,”Jordan’s epic series of romance, war and social justice in 1800s America. “The Freedom Song” is the second book in the five-novel series.

“Your Heart of Gold” is the debut book in Jordan’s “Lovequest Series,” quick-read romance novels about rediscovered love.

The Mikejordanbooks.com website, featuring novelist Mike Jordan, was launched on Sept. 1, 2016, hailed by Amazon and Createspace team members as having unique features for readers of fiction, including a patent-pending interactive author-reader process called “Coffee Break.”

“Coffee Break” pages are integrated into both the paperback version and the Kindle version of author Mike Jordan’s novels that direct readers to chatrooms to discuss the book with the author and other readers while they are still reading the book.

The website also includes a “Photo Gallery” feature allowing readers to view photos of the people and places in Jordan’s novels while they are reading, and a “Back Story” page that lets the reader in on Jordan’s writing and researching process and explains the original ideas that led to his books.

The three novels with these features are Jordan’s “Crockett’s Coin,” “The Freedom Song,” and “Your Heart of Gold.” All three books can be purchased on Mikejordanbooks.com or at Amazon.com and dozens of other book sites and bookstores around the world.

“My son-in-law, who is an executive with Time, Inc., and I were talking about how cool this would be, then we developed the “Coffee Break” idea and filed the patent,” said Jordan, an award-winning writer and professor emeritus at Pepperdine University in Malibu, Calif. “Part of why I love writing is the interaction with people I meet when researching and writing and of course my readers. This will allow me to develop and deepen these relationships.

“If you are reading ‘Crockett’s Coin,’ for example, after the first 12 Chapters you come upon the first “Coffee Break” page that directs you to the Crockett’s Coin First 12 Chapters chatroom. There I have posted a few blog-like items to get the conversation going, but the direction of the discussion is really determined by the readers themselves.”

Jordan admits the idea is “a bit of a departure from the norm,” but adds that “for those who like this kind of interaction, and especially for book club and book group members, it will be a great way to connect with the author of the book while they are reading it.”

There is even a chatroom called Movie Talk where readers can have some fun with the author talking about actors and actresses, listening to the songs mentioned in the novels or songs that could be part of a movie sound track.

The “Coffee Break” chatrooms come with a stern warning: “Respect your fellow readers. Please only comment in the post that corresponds with your place in the book. No spoilers, please!”

Lakeport Plantation, an Extraordinary Museum Open to the Public

Lakeport Plantation, venue in “The Freedom Song,” An Extraordinary Museum Open to the Public

The readers of author Mike Jordan’s novel “The Freedom Song,” released Sept. 1, 2016, aren’t restricted to just imagining Lakeport Plantation – they can actually visit the restored mansion featured in the novel or navigate an extensive website devoted to the Greek Revival wonder on the banks of the Mississippi River in Southeastern Arkansas.

In 1998, when Jordan selected Lakeport as a venue for his novel, he was unaware that the mansion in Chicot County was still standing.

“I decided I should travel down to where this Lakeport Plantation was and walk the walk – continuing my research for ‘The Freedom Song.’ I was sure any remnants of the old plantation probably were long gone, but at least I could walk along the Mississippi River and get a good feel for it.

“I checked into a little motel in Lake Village, then headed out toward where the plantation was located. Imagine my shock – and joy – when I discovered that the Lakeport mansion still stood after all these years. I was delirious with excitement.”

Jordan said the huge house was boarded up and in disrepair, but he went back into Lake Village and found the owner, Sam Angel, who allowed him to pry the plywood off in the kitchen area and get inside for a look-see.

“It was incredible! I mapped out the whole mansion. In the cupboards I found quinine – still there as a treatment for malaria.”

Mr. Angel donated the mansion to Arkansas State University in the early 2000s and the mansion has been restored to its original grandeur as a museum. Details about its history and restoration can be found on the Lakeport website.

The museum is open year around, Monday through Friday, 8 a.m. to 5 p.m., except Labor Day and Thanksgiving. There are two daily tours at 10 a.m. and 2 p.m. The museum is closed Saturdays and Sundays.

“The Freedom Song” can be purchased on Mikejordanbooks.com, at Amazon.com, or at dozens of other book sites and bookstores around the world. “The Freedom Song” (Mike Jordan, fiction, Jordan Books, 490 pages, $17.99) is the author’s second novel in the “Lost Heroes Series,” Jordan’s epic series of romance, war and social justice in 1800s America.

Meet author Mike Jordan on Saturday, Nov. 12, at the Hoodland Public Library in Welches, Oregon.  At the 4 p.m. event Jordan will tell the story of how he began the research and writing of “Crockett’s Coin,” the first book in the five-novel “Lost Heroes Series.”  A book signing will follow the “Author Talk.”

The Hoodland Library is located at 24525 Welches Road, Welches, OR.

Three of Jordan’s titles will be offered at special holiday discounts at the book signing.  Jordan will also sign the second novel in the series, “The Freedom Song,” and will introduce “Your Heart of Gold” at the event, his debut novel in the new “Lovequest Series.”

Below are links to just a few of the many articles recently published about Mike Jordan’s novels:

From the Pepperdine Graphic:

From the Tri-City, Washington, Herald:

From the Black News Network:

From the Malibu Times:

From the Milwaukee, Wisconsin, Journal:

From the Arkansas Democrat-Gazette: 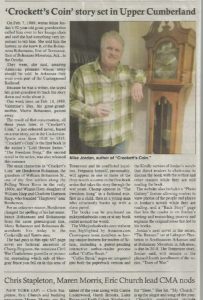